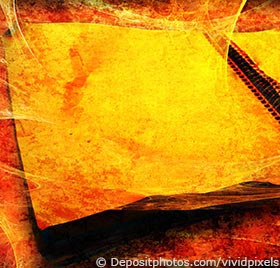 At the age of 7, he knew he wasn’t like everyone else. He was never built for the corporate world, but that’s where he ended up.

His passions were like ghosts. Every time he thought he had it figured out, his hand passed right through.

Now, he was successful on the outside, but dead on the inside. His inner wisdom kept nudging him to explore the world, but he resisted.

His resistance led him to a love-affair with food. He gained 20 pounds. He grew more and more empty. Days of depression turned into months. Insomnia raged during the night, sucking the life out of him like a cosmic vacuum cleaner.

One day, while staring at the ceiling, he had the urge to organize his closet. Organizing things calmed him, and sometimes helped him sleep.

While digging around in the closet, he found an old, dusty notebook. It was filled with his stories, essays, thoughts, and dreams.

He was reminded of a time in his childhood, where he enjoyed writing silly stories about talking animals.

But writing often felt like waging war against himself. He grew to hate his prose. He compared himself to the Hemingway’s of the world, and eventually lost momentum. He simply didn’t think he was good enough.

Getting a job seemed easier, so that’s what he did. He threw the notebook in the closet and forgot all about it, until now.

Now he felt as if an unseen force had turned his body into a magnet, and he was being pulled to write again.

That night, he wrote for two hours straight. He poured his thoughts on paper. He explored his fears, and he wrote about his dreams.

He wrote down one sentence that he couldn’t get out of his mind. It was as if he didn’t write it. It held immense power, like an nuclear bomb opening up his mind.

The sentence was, “You don’t have to find a passion, you just have to follow the breadcrumbs. To calm down and listen.”

Color seeped back into his black-and-white existence.

He didn’t know what he was passionate about. All he knew was that he liked writing in his notebook. So he wrote, and he began to trust life.

After three months, he felt the magnet inside him intensify. He felt an urge to start a blog and share his thoughts.

He wrote about everything. But he doubted himself.

He explored these fears in his notebook. Time and time again, the wisdom inside of him echoed, “You just have to follow the breadcrumbs.”

And that’s what he did. He wrote about everything. To hell with his fears, and reality, and practicality.

He did what made him come alive. He couldn’t control the future, and he didn’t try to. He just took life one day at a time, one step at a time.

He was beginning to realize that life wasn’t about figuring it out, but about following the breadcrumbs, and enjoying yourself. When he did this, his connection to his wisdom was stronger because his mind was calmer.

Slowly but surely, he began seeing through his patterns of worry and fear.

He focused on what he loved to do. He wrote when he returned from work. He blogged when the urge struck.

As the months turned to years, Hank wrote, and the more he wrote, the more doors opened for him.

It was never about finding his passion. It was about exploring and having fun. The more he took action, the more the Universe moved with him.

And after awhile, he noticed that he was enjoying his job more, because his perspective had shifted. He was thinking about it differently.

He was spending more time in the present moment.