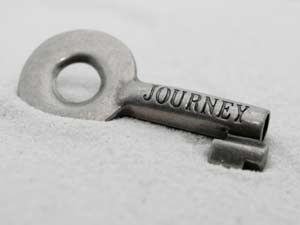 Five years ago I was stuck in a prison constructed by my own hands.

I wanted to do what truly set my soul on fire, but I didn’t think I could.

I was miserable and slowly losing hope, but one day it all changed.

I stopped believing my lies.

I discontinued my subscription to negative thoughts.

And I began the journey.

I made the shift from waiting for something to taking matters into my own hands.

I went from coming up with reasons for why I couldn’t to saying “so what?”

I realized that I had been looking for permission to follow my passion. I was looking for people to tell me it was okay, and that it was all going to turn out fine.

But no one could give me the confirmation I was looking for, and I understood that it was never going to happen unless I dropped the need for outside approval.

The only approval I needed was from within.

Waiting wasn’t going to change anything, except make me older, so I decided to start.

I chose to stop saying no to my passion.

Making the decision to follow my passion changed my life slowly, but surely.

Once I took that first leap into the unknown, I realized I could follow my excitement. It was like a veil started lifting and I began catching glimpses of reality.

All I had to do was start.

I followed my own sense of direction and I learned to trust myself. With each step, I discovered more and more of what I was capable of.

And I became aware of the fact that life can be enjoyed right now, even with all the perceived problems around me.

There’s uncertainty, fear, and worry, but I enjoy life more now, because I’m moving in the right direction. I feel more alive, and I’m excited to wake up in the morning.

And it all started with the decision to say hi to uncertainty.

Following my passion didn’t turn my life into a fairy tale. It didn’t change my life on the outside; instead it changed me on the inside.

It’s almost as if finding and following my passion wasn’t the end goal, but the process of getting there.

I now have more time to do what I love, and I’m more confident in following my heart.

At times it almost seems as if life lives itself. When I get out of the way, it’s like turning downstream and enjoying the ride.

It’s no longer such a struggle, because no matter how much I try to control life, things will still happen.

I’m still afraid. I still have problems. I still make mistakes, and everything goes on as normal, but at the same time, it doesn’t.

If there’s anything I’ve learned during almost the last decade of making a living unconventionally, it is the fact that if I want to do something, I have to be willing to start before I’m ready.

You’ve probably been told to take action over and over again, but are you?

Or are you waiting for something?

If you aren’t getting the results you want then something needs to change.