It took me about 2-3 years. It started by failing a lot, but I kept going, and I slowly started getting those small victories.

Persistence was key. I wasted a lot of money and time, but it was all worth it.

The reason I write this post is because a few of you guys asked me how long it took to get to a full-time living online.

Some say that it’s counter-productive to reveal how long it took for someone else to get somewhere, but I figure the more information you have, the better, right?

In early 2007, I was still playing poker for a living, but the urge to do something else was growing. I wanted to start creating websites, and get out of what I was doing.

I wanted to help people, make passive income, and feel even better about what I was doing. Poker had treated me well, but I was growing weary of it.

I jumped on a coaching program. I got a website up. I wrote a short ebook that in hindsight was pretty horrible, but it was my first one, so I forgive myself. I knew nothing about search engine optimization, and in general felt like I was doing everything wrong.

It all turned out to be no good, partly because of an incompatible match with the coach, and the fact that I didn’t believe in myself at the time.

After the coaching program, I felt like crap, but I was determined, so I kept going. That’s when I joined SBI, and started a website there.

I butchered the keyword research, I didn’t build links, and in general, it didn’t go as planned. I did manage to save the site later and get it to $300-500/month, so all was not lost.

It was a learning experience, and it wasn’t until early 2009 that I finally had the guts to get feedback on what I was doing wrong.

(Note: I’m talking about niche websites here. If you’re blogging, it definitely pays to do your research, or at least see that there’s a market in what you want to do.)

Early 2009 – Started One of My Most Successful Websites to Date

When I took that dive into getting feedback in the SBI forums, it hurt my ego, but I still thank Norbert (if I remember the name correctly) for giving me honest feedback on my butchered research.

I walked away from that experience and felt down for a few days, but I bounced back, and started from scratch.

I now had more experience than ever before when it came to building a successful website. That’s also when I met Tomaz, who helped nudge me in the right direction.

What I realized was that I didn’t really need anyone’s help; I was just asking for permission all the time, and once I realized that, I started taking even more action, because my confidence grew.

I did my keyword research, I wrote content, I built links, and I did this full-time for about three months. I then left the site, and over a year later, it has grown on its own in both traffic and income.

People tell me I should stick to one thing, but that’s not really who I am. I do what I am interested in, but I believe in doing one thing at a time, which means not jumping around from thing to thing and chasing the shiny, which is why most people fail online.

After I had finished my second SBI site (the successful one), I bumped into article marketing, and I read a story of someone who went from living in a caravan to a very comfortable life. That alone got me interested, and I knew that if I applied myself, I would be successful.

So I joined a training program, I learned the ropes, and took massive action. For the next 6 months I did article marketing full-time. I wrote and submitted thousands of articles, and I outsourced a bunch, too.

At the end of 2009, I was probably making close to $2,000/month. My memory fails me, but it should be somewhere around there.

That’s when I started feeling like I wanted to start blogging. It seemed hugely rewarding, and I loved the interaction I was seeing in the blogging community.

To this date, blogging has been one of the hardest ways to make money, but then again, I came into it not having money as my sole priority, but to do what I love.

I’ve connected with people I never thought I would, and many opportunities have fallen into my lap.

As you can see, it took me a few years to learn everything. It can seem daunting to think that it takes 2-3 years, but the first time I tried this in late 2006, I failed, and I failed again, and after that I really didn’t do much in 2008.

It wasn’t until I got serious in 2009, and started listening to how it is really done, and not making up my own rules, that I started succeeding.

I believe you can succeed within one year (or less), if you follow what works, don’t try to come up with your own stuff, and this is one of the main reasons why I recommend training programs, because they guide you step-by-step to where you want to be.

When you only have one source of information (the training program), you do not get overwhelmed, and if you do, you can always get help.

And remember, I’m still learning and bumping into challenges. Whenever I learn something new, I run into resistance. 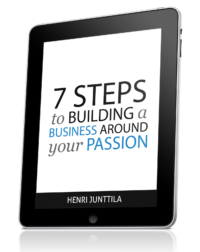 Join the exclusive newsletter and grab your free report: 7 Steps to Building a Business Around Your Passion.

Join the free Wake Up Cloud newsletter, and get instant access to my report (+ MP3): 5 Steps to Finding and Following Your Passion.

You also get access to my newsletter, where I send out the occasional article, video, or promotion to help you dance toward your dreams.

When you're ready, fill in your email below, and get access instantly.